A few hours in Amsterdam - The 5D Mark III and RAW

This year I spontaniously decided to got to the IBC (International Broadcast Conference) in mid september after I already threw away this idea. But I’m happy I did cause it was great to visit Amsterdam (where the IBC is happening) and to go to the tradeshow and chat with many interesting people and network a bit there. And to see the cool new gear of course.

But besides all the interesting gear of course I also took some time to see a bit of Amsterdam. Unfortunatetly my visit was way to short and I ended up being at the show for three days and only having two days for Amsterdam itself. But on the first day in Amsterdam I took my camera bag and the tripod to play a bit with the 5D. I wanted to have some more material in raw to play with and to get more of a feeling for it. And it was really good I decided so, cause especially in the time around sunset the sky was nice and mostly clear. 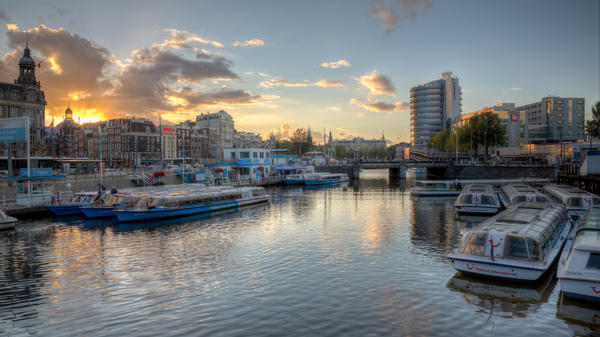 All in all I ended up just shooting about 40 minutes of material while getting a feeling for the city. The video above is a short collection of some of the clips which I cut and graded in the Resolve 10 Beta.

With this project I discovered some shortcomings with shooting 5D raw. The biggest thing was: In post I discovered that all material regardless of the setting in camera seems to have a White Balance fixed at 5521 Kelvin. So I ended up setting the Camera RAW module in Resolve to cloudy, shade, sunny etc. depending on the shot to get a better starting point. Number two: the few cloudy shots at the beginning are a bit muddy and even after trying many stuff of the they don’t look nice. So I only left them there for demonstration purpose.

Last but not least most of the shots seem to be very oversaturated leading to bring saturation down for most of the shots. (Note that I used the standard REC709 debayer in Resolve at a starting point knowing that all the color information is there in resolves color space even if I debayer with REC709.)

With the rest of the shots and the possibilities of raw I’m really pleased and happy that I choose the 5D when switching away from Sony. If Magic Lantern raw wasn’t there in June/July I’d most likely be a D800 owner now ;-)

Despite all cool new features of Resolve 10 featured everywhere definitely is that now compressed DNG is supported. I used the Adobe DNGConverter to reconvert the DNGs created by RAWMagic which with the right setting leads to lossless compressed files with about 55% of the original file size. Only some CinemaDNG metadata like the framerate seems to get lost in this process.

And last but not least: Stay tuned! The release of the first episode of a webseries I shot in August is planed to be released this weekend.