In this article I want to note down some additional insights I gained since I wrote my Review of the NEX-5N. 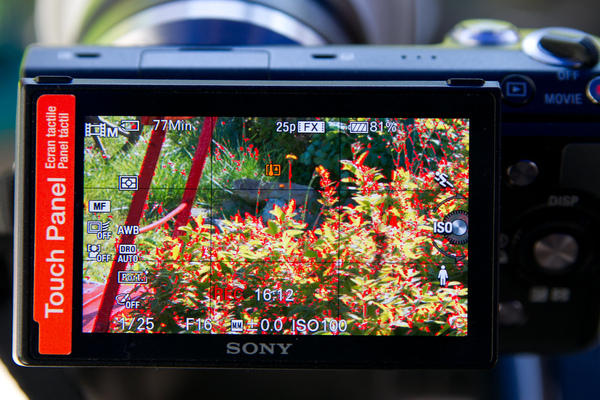 As I wrote before, I experienced some issues with overheating when I was out for my first test shoots. They arose when leaving the camera on for some time, not recording one long clip but keeping it ready to shoot. When the camera is getting too hot, one gets a warning sign on the screen as can be seen in the image on the left, and a few minutes later the camera will power down.

Today I started recording and checked the camera state every few minutes for signs of impending heat issues. I set the camera up outdoors in the shade, it was about 20°C on a sunny day. My first test was at 25p, 24 MBit/s and the overheating warning appeared after some 12 to 16 minutes, while recording continued until a total of 22:54 minutes was reached and the camera switched off. After letting it cool down I started the second test at 50p, 28 MBit/s. It recorded a full 29:50 minutes and I continued immediately. It stopped after 9:23 minutes.

This little Test is absolutely unscientific but shows that there is a problem with overheating and the NEX.

Photographing with the NEX

Every contemporary camera allows one to take great photographs. What matters most for a good result is the photographer, so the photos I got from the NEX are very beautiful with the correct settings and a nice scene. 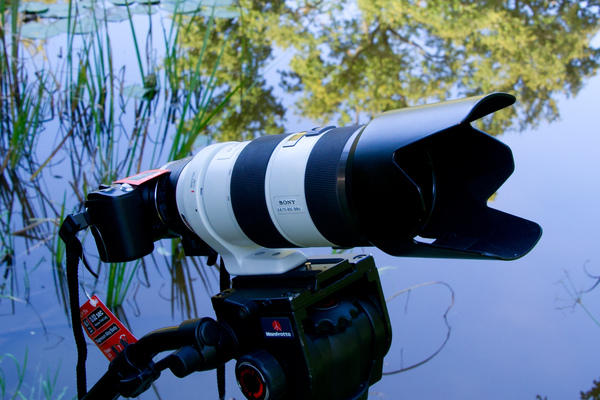 But something that can be very helpful is a good autofocus. I love my A850’s, which is very good and served me well in many situations. It’s really fast with the sony’s supersonic motor lenses. The 70-200 f2.8 has a wonderful autofocus speed on the A850, so I hoped that with modern contrast measurement techniques the NEX-5N would have a nice autofocus, although knowing it would hardly match a real DSLR’s.

While testing the NEX a bit more in depth I also went out to take some photos with the autofocus enabled. As I wrote before, I want full manual control when shooting video and don’t miss autofocus there. But while playing with photos I realized that the NEX’s autofocus is a mess. It takes seconds – feeling more like minutes – even with a lens as fast as the 70-200. Maybe it works better with the NEX lenses but I really can’t find a reason why it should. 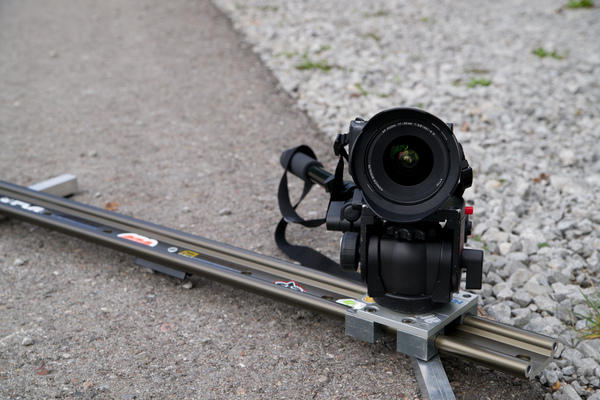 After seeing the bad start of the A77, which came out these days with some big firmware bugs, I’m even more happy that I took the NEX (which also has its issues like the clicking noise). All in all I’m happy with the NEX but I won’t if I had bought it for photography. So as I predicted the A850 is and will be my photo and the NEX is the video cam.
Leave a comment | 2 Comment(s) 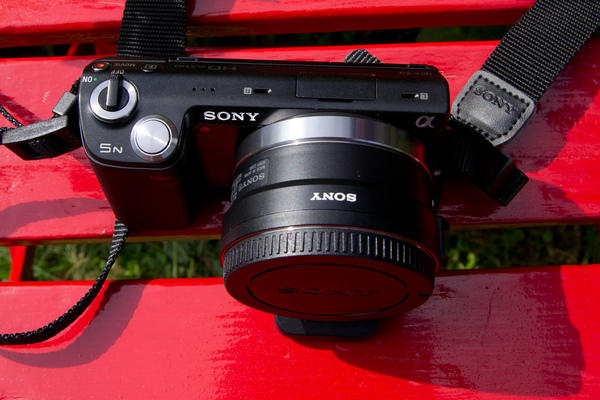 On Friday, 9th I got my Sony NEX-5N (the black one) and on Saturday last week my LA-EA1 (Alpha-Mount to E-Mount adapter) was delivered. I ordered the NEX without lenses because my father and I have a nice selection of high quality Alpha-Mount lenses. So on Saturday I started to play a bit with the NEX.

To make one thing clear: I have an A850 and love it for taking pictures. But I wanted to start to also shoot some video so I bought the NEX-5N. For video handling wasn’t a big issue for me because a camera – especially without stabilization (no stabilized lens yet) – is mostly used on a tripod, a shoulder rig or such stuff. As a foto camera I would only use the NEX if I can’t take the A850 for some reason. So I’m not going to write too much about photographing with the NEX here.

I only want to write about some aspects here and let the videos speak for themselves.

The video quality is very nice and I was a bit overwhelmed when I looked at my first footage shot with the NEX-5N:

The Quality in higher ISO modes is as I expected. ISO 1600 seems usable, ISO 3200 and above is very noisy.

A issue brought by all the CMOS sensor cameras – rolling shutter – also can be found on the NEX. But by now I didn’t really had bad aliasing or moire I saw on the footage. But maybe I shot the wrong stuff for this effects.

On Friday “The Digital Visual” published an article about cinematic picture profiles which may be interested for all wanting the NEX for shooting video: The Sony NEX-5N Gets Cinematic!

The NEX is a photo camera with video as a goody. This can be seen in the sound section. No external mic in via trs connectors. No headphone jack. And then there is the clicking issue which appears when moving fast. In the video you can hear this annoying click sound which comes from the camer, because it’s also hearable without a lens. All in all an external sound recorder is the best way for getting sound for your videos shot on the NEX.

The handling of the NEX-5N is ok for it’s size. All important controls (important for me) are reachable via direct keys or user configurable keys. With the new generation of cameras Sony learned their lesson and gave us users full manual control also in video mode.

In the video I scroll a bit through the menus to show the options available. The only thing I miss in custom menu configuration is video quality selection.

Some thoughts about electronic viewfinding 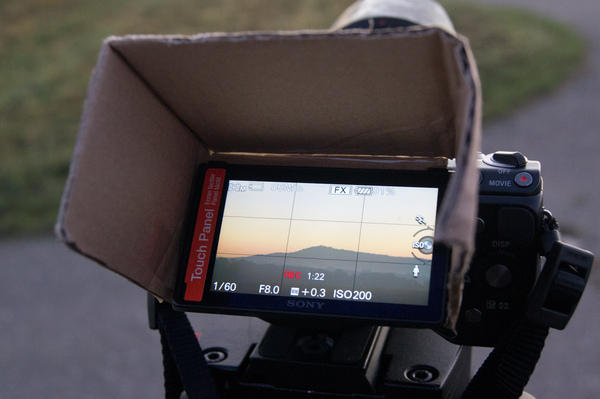 While writing this lines it was 5:30am and I was sitting outside to do astro and sunrise timelapses and a bit video. I use my A850 as my main cam and have my NEX-5N and the A55v from my uncle to play a bit.

What annoys me most a both the NEX-5N and the A55v is to not be able to easily setup astro shots. For this the electronic viewfinding technologies are absolutely not prepared. With the clear (non-noisy) A850 viewfinder it’s much nicer to shoot astro photographs.

For daily use the A55 Viewfinder is Ok, as long as you don’t have to wear glases. My father had problems using the A55 Viewfinder. The Monitor of the A55 and the NEX are Ok as long as there isn’t to much sunlight shining in. For this reason I made a cheap and simple sunscreen for the NEX as you can see in the photos. But all in all I like the LCD of the NEX and the A55 for filming. 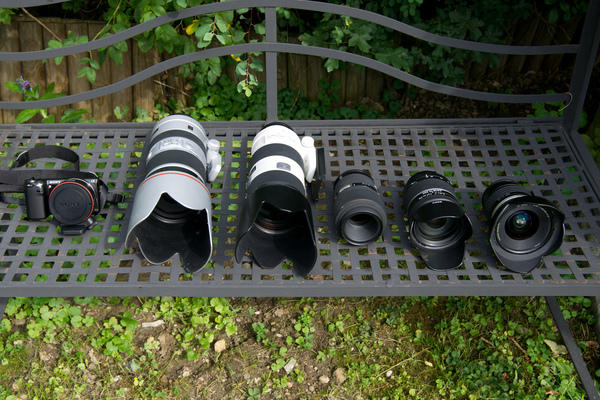 The NEX-5N is a nice camera which gives Sony users a cheap possibility to start making videos. The overall video quality is very good and issues like aliasing are a general problem of photo cameras used for video. If the NEX-VG20 had a sensor designed for video it may have been the better choice but it has the same sensor like the NEX-5N. The sound of the internal microphones isn’t usable but the best way for HDSLRs filming and sound seems to be an external recorder anyhow.

So in it’s price class the NEX-5N is a good way to go for everyone with Sony lenses. If the price isn’t the problem the NEX-FS100 may be an alternative because of it’s real video sensor.

This is only some first test Footage I shot today after I got my Sony LA-EA1. Yesterday I got my new NEX-5n and had no lens to test it :D I’ll publish some kind of review and more information about the shots shown here the next days. And I’m planning to make this blog multi-lingual some time …

Remark: I corrected the exposure in some of the clips (and the slow motions) but there was no further editing or color correction.